The Patient with Dyspepsia

No commercial support for this activity.

H pylori, a gram-negative flagellated bacterium organism that burrows into the luminal mucous layer overlying the gastric mucosa, is present in over one-half of the world’s population and from 30% to 40% of the population in the United States.2 This organism, which is transmitted via an oral-oral or fecal-oral route, produces urease, which enables it to survive the acidic gastric environment. Flagella and urease are important for the colonization of the gastric mucosa by the bacterium. The gastric mucus layer provides a niche protecting the germ from gastric secretions in a susceptible host.3

Chronic infection can cause atrophic and metaplastic alterations in the gastric mucosa, contributing to ulcer disease. Chronic active gastritis, induced by H pylori infection, is characterized by an infiltrate of the gastric epithelium and the underlying lamina propria by neutrophils, mast cells, T and B lymphocytes, and macrophages.4 Mast cells may be important effector cells in gastritis pathogenesis. H pylori may be detected in approximately 90% of individuals with peptic ulcer disease, but less than 15% of infected persons develop ulcer disease.5

Infection with H pylori results in several disorders, of which, the most common is pangastritis. Many of these patients are asymptomatic and do not develop serious gastrointestinal disease. However, some patients may develop another phenotype: antral predominant chronic active gastritis and duodenal ulceration. In this phenotype, somatostatin-producing antral cells are destroyed by the H pylori-related inflammation. Somatostatin acts directly on the gastric parietal cells via a G-protein coupled receptor to reduce acid secretion, and also acts indirectly to decrease gastric acid by preventing the release secretin, histamine, and gastrin.6 This disruption of the mechanisms that reduce gastric acid secretion contributes to gastric and duodenal mucosal injury as well as ulcer formation. The gastric cancer phenotype results in multifocal atrophic gastritis with decreased gastric acid production. Chronic active gastritis may lead to duodenal and gastric ulcer disease, gastric cancer, and mucosa-associated lymphoid tissue (MALT) lymphoma. H pylori is present histologically in up to 90% of MALT tumors.7

The mortality rate for H pylori infection is approximately 2% to 4% of all infected people, related to infection complications, such as gastric ulcer perforation, or MALT lymphomas of the GI tract.8 No sex predilection is currently known. Females have a higher incidence of re-infection (5% to 8%) than males.9 H pylori infection may be acquired at any age, but most frequently during childhood. Prevalence rates are high in developing countries.

Patients with dyspepsia are stratified for management based on the presence or absence of alarm features (Table 1).

In patients presenting with dyspepsia, a review of the medication list is important to assess whether these medications (ie, NSAIDS, aspirin, erythromycin, phosphodiesterase inhibitors, bisphosphonates, etc.) may be responsible for these symptoms. Diagnostic testing for H pylori is warranted in patients with active peptic ulcer disease, previous peptic ulcer disease who were not evaluated or treated for the infection, dyspepsia with alarm symptoms, persistent dyspepsia, resection of early gastric carcinoma, and MALT lymphoma. Both noninvasive and invasive testing can be used to establish the diagnosis.

This rapid test is based on monoclonal antibody immunochromatography of stool samples, with a predictive value, sensitivity, specificity exceeding 90%.12 The results are positive in the initial stages of infection and can be used to detect eradication after treatment.

This test is based on the detection of the products generated when urea is split by the organism. After the patient drinks a carbon 13 or carbon 14 urea-containing beverage, the concentration of the labeled carbon is measured in the breath.13 Because the human stomach does not produce urease, a positive result is possible only with H pylori infection. False-negative results can occur due to infection with H pylori strains that do not produce much urease or with the administration of antibiotics, proton pump inhibitors, histamine-2 blockers, or bismuth. Therefore, H2 blockers should be stopped 24 to 48 hours before testing, PPIs 2 weeks before testing, and antibiotics as well as bismuth 4 weeks before testing.13

The enzyme-linked immunosorbent assay that measures immunoglobulin G antibodies against H pylori is relatively inexpensive and easily available. However, the antibody titer may remain elevated for an extended period of time after H pylori eradication, while the number of false-positive results increases with age.14 Although, IgG positivity confirms exposure to the organism, it does not indicate if the patient had been previously treated and the organism subsequently eradicated, or if the patient is untreated or undertreated and still active.14

Antibiogram analysis for organism-specific sensitivity can be useful in geographic areas with high-resistance rates to metronidazole and clarithromycin.15

Endoscopic evaluation and testing for H pylori includes rapid urease testing, histology, and culture. Esophagogastroduodenoscopy (EGD) is warranted in patients with alarm symptoms, as well as those that do not respond to PPI therapy, to visualize the esophagus, stomach, and duodenum and obtain biopsy specimens from the gastric antrum and/or any other areas that appear abnormal.16

Histology, considered by some to be the gold standard for diagnosis, has a sensitivity and specificity of 95%.17 Biopsy specimens, with Giemsa stain, usually demonstrate the organisms adhering to the gastric epithelium, lining the gastric glands and coating the gastric wall, with a decrease in the mucous film. In addition, a large inflammatory infiltrate of mast cells, lymphocytes, and neutrophils can also be found (Figure 1). 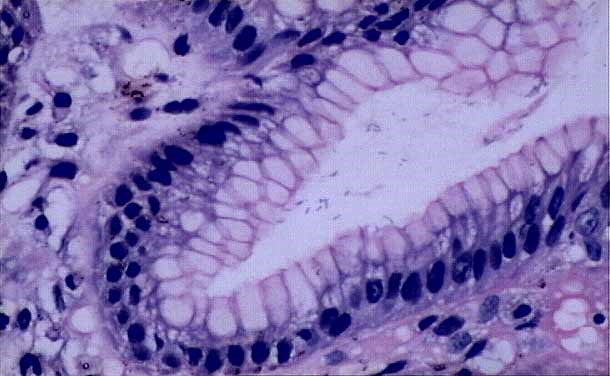 Rapid urease testing of the biopsy specimens has a high sensitivity and specificity, while culture may be helpful to evaluate patients who may be resistant to therapy.18

A fecal antigen or urea breath test should be performed 4 to 6 weeks after treatment. Serologic testing is not helpful in documenting eradication, because the serology will remain positive.2

For patients with dyspepsia younger than 50 years of age without alarm symptoms, empiric treatment with a PPI (if the patient is from an area with a low prevalence of H pylori) or a test-and-treat strategy for H pylori (if the patient is from a developing country where infection prevalence is high) is warranted.22 Importantly, the efficacy of improving dyspepsia symptoms in patients with dyspepsia is controversial, with conflicting results being reported. If testing for the organism is negative, then a trail of PPI therapy could represent a prudent approach.22 Data with H2 blockers has been inconsistent concerning symptom relief for dyspepsia and the drugs are not FDA approved or formally recommended for this indication. Not to be overlooked is the value of smoking and alcohol cessation, avoidance of medications that can aggravate dyspepsia, as well as the impact of daily life stressors upon gastrointestinal symptoms.

Are you sure you want to leave this activity?

You haven't earned your CME credits yet.